More than just an OPAC

Anything that helps dispel the myth that the library system is there to issue and return books and not much else is worth a second look.

The ability to play media, audio and video, right in the opac sounded enticing to me.
Koha includes this function; using HTML5 it is now possible to have a further ‘tab’ at the item detail screen labeled ‘Play Media’. Selecting this tab presents the user with a built in media player.

OK, nice feature but what use is it?
Well, imagine for a moment…
Search for atoms and get an animation of atomic motion right in the opac. Not bad.
Search for Kokako and hear a bird. Nice.
Search for Hairy Maclary and hear the book read aloud. Great.

All from within the library opac.
The Koha OPAC is more like a public library portal than an ‘online public access catalogue’.

As with all enhancements in Koha, someone has worked on a feature, coded a solution, tested, recoded and finally released the result for the community to benefit. Often for no financial reward, sometimes sponsored by a support provider.
With Koha, because it is those who use the software who develop it, you tend to get features that users want rather than what the marketing department think will be most effective at undermining the competition.

Thank you to Mirko Tietgen (and those who tested, QA’d and assisted allow the way) for this feature.

Now, this little piece of html magic relies entirely on HTML5 support in *your* browser.  I use Firefox v21.0 and it works perfectly. If it doesn’t work in your browser, get a better one.

See for yourself… go to demo.koha.kiwi.nz and search ‘freedom fry’ for video or ‘kokako’ for audio. 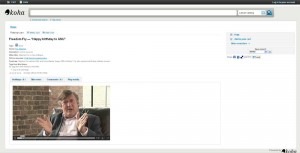